A Window into the Past

When the stars came out in Charlotte

She was sitting on a battered red cooler next to a small yellow tent. I didn’t ever ask her name, but I did hear her story. She had been living in the tent with her mother the women had pitched inside the Charlotte Convention Center weeks ahead.

She was resolved and determined, but not bitter. “We are just thankfu1 for the care we got. We have no where else to turn.” Moments 1ater, a network news crew got wind of her touching story and, soon, she was speaking into their camera.

It’s hard to say that this was a typical story from the Charlotte MOM, or any MOM for that matter, but it suggested the kind of human misery and resolve this program seeks to address. This MOM clinic was, above all, extrirordinary in terms of its sheer size and scope.

Well over 1,300 volunteers, close to 2,000 patients treated, more than a million dollars in free care.

On the floor of the cavernous convention center that adjoins the NASCAR Museum, 88 dental chairs were arrayed in rows, flanked by the NCDS X-ray van and a mobile dental clinic, long tables bristling dental instruments, banks of sterilization machines, a small army of dental lab technicians crafting partials.

In the background, rock music blared. Dental and pre-dental students from state universities scampered about cleaning and sterilizing used instruments and giving out latex gloves and blue and yellow gowns. TV cameras and photographers poked into the faces of exhausted patients and dentists.

In an adjoining room, the size of a football field, a sea of chairs was filled, each of them, with more than 2,000 patients on Friday morning. Many of the occupants arrived as early as 5 p.m. the day before and spent the night huddled in their hard plastic beds until their number was called the next morning.

As the sun rose over Charlotte, casting a pinkish glow over the highrises, hard decisions were being reached inside the convention center. At 5:45 a.m., Dr. Bill Blaylock, MOM’s director, figured the clinic had alreacly reached capacity and the doors to the outside were shut.

Some, who’d arrived just that morning, were unhappy with the decision and made it known. Yet, to thousands who heeded the “first come first served” policy, they were “in” even though there were hours of waiting ahead.

And so they came. Wrapped in blankets and plastic bags, clutching worn pillows, carting folding chairs and sleeping bags, some of them grasping simple plastic grocery bags with most of their worldly possessions.

They were the people of the streets, from the homeless shelters, but also those who had lost their jobs and their dental insurance. There were young mothers, the working poor, young and old, the infirm. They came with walkers, on crutches, in wheel chairs, helped by their children.

They were people with few resources, yet abounding with hope that these dentists could help them out of terrible and often debilitating pain. They were people without dignity, many missing teeth that would hamper them in their quest for work, people trusting that the dental teams in that huge and noisy room could make them whole and help put their shattered lives back together. Missions of Mercy is not just a noble or even notable cause. It’s not splashy or a photo op. It runs deeper than that.

You find that out when you talk to patients who have been treated. And whether it’s a root canal or a several extracted teeth or some filings, MOM is about human contact, about a moment when people in terrible need know that somebody cares, about a respite in terrible lives made worse by an economy that slams the door on those on the margins.

MOM is about helping people on the bottom of the social heap and about a fleeting moment when people there know they count for something and that somebody cares.

MOM is about giuing back hope, if even for the moment.

And so they went, treatment over, back to their lives that for many of them are miserable and hopeless. They shuffled down the long, elegant carpeted lobby to the street, most heading toward the life of desperation they had left behind.

They had bloody gauze stuffed in their mouths and tears of relief in their eyes. Gripping a blue bag containing a tooth brush, floss and some toothpaste, along with some other goodies, they knew they had been helped in ways that could have prevented sickness, or worse. Mostly, they were finally out of pain after months and sometimes years.

Back on the treatment floor, hundreds of dentists and their assistants went about the job of seeing and treating their next patient. And the one after that. They were trained not to get caught up in the emotion of the moment. They were solving complex oral problems. They lived in the moment. They were focused on doing everything they could. Not looking for recognition or praise but satisfied with what they had done. When their shift was over and they had time to reflect and the enormity of what they had done during their five-hour shift sank in. It went all the way to the heart and to the soul.

Watching these dentists and their helpers leave, as they peeled off their gloves and gowns and masks, it was clear that the emotional impact of this time had made its way to their hearts.

Their impromptu tears told the story. As the poet once wrote, “Tears are the magnifying glasses through which man sees the stars.” And so it was in Charlotte.

For those treated and for those dispensing care, every one of them saw the stars of this special weekend. And whether they were camping out, sitting on cooler, or extracting diseased teeth, taking x-rays, or making dentures, there was a constellation available for viewing.

Most, I believe, saw it. 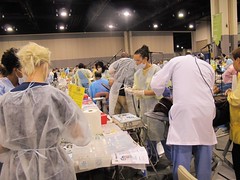 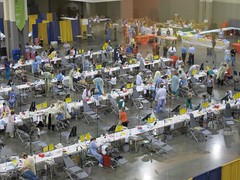 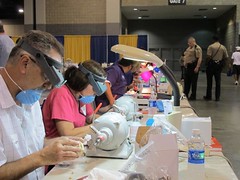 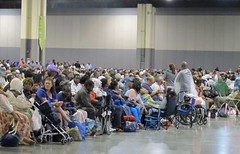 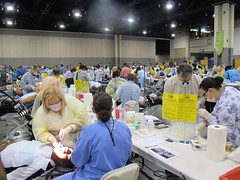 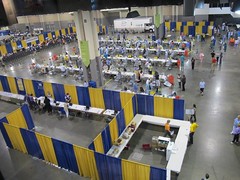